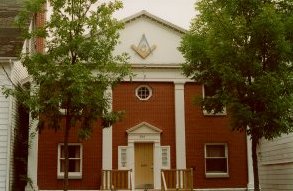 Meets 2nd Tuesday in each month at 7:00 pm except July & August at the Masonic Temple, 204 Hillsborough  St., Charlottetown (South of Euston St., between University and Weymouth Sts.)

Documents at the Nova Scotia Archives confirm that in 1790 a Petition from several Master Masons to establish a Craft Lodge in Charlottetown was approved by the Provincial Grand Lodge of Nova Scotia. The Petition, dated September 22, 1790, was addressed to the “Right Worshipful Grand Master of Masonry of Nova Scotia” and stated thus: “We have taken the liberty to address you and the Grand Lodge for a Warrant to form a Lodge on this Island, and being unacquainted with the form of application (if there be any) our Worthy Brother Captn. Livingstone has given his word as a man that he will deliver this, acquaint you of the circumstances and vouch for those who have subscribed their names as Antient Master Masons.” (NSARM, MG 20, Vol. 2004, #4, Item1) The Petition was signed by Peter Stewart, Thomas DesBrisay, Joseph Alpin, William Baker, William Hillman and Samuel Hayden.