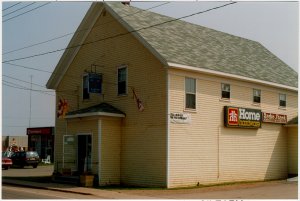 Meets 3rd Thursday in each month at the Lodge Room at 8:00pm above the Home Hardware store, O’Leary
(South side of Main St. in mid-town, near Bank of Nova Scotia.)

The origins of a Masonic Lodge in O’Leary may be traced back twenty-five years before Corinthian Lodge became a reality in 1950. In 1925 the newly established Verdun Lodge of Oddfellows in O’Leary was appointed as a committee “to plan, and design a suite of rooms on the second floor of the O’Leary Public Hall.” All four members of the committee were Brethren in Zetland Lodge No. 7 A.F. & A.M. in Alberton. Twenty-five years later when the Verdun Lodge had surrendered its Charter, the same suite of rooms became the Lodge Room for Corinthian Lodge No. 19 A.F. & A.M.. Only one member of the original committee, W.Bro. A.J. Matheson, was alive to realize the dream. (Threads of the Past, p. 138-142)

Circumstances were quite different in 1950 and the prospects for a successful Masonic Lodge in O’Leary inspired the local Brethren. The number of Freemasons in O’Leary and vicinity had grown from six to twenty in that same twenty-five year period. That fact and the desire to purchase an available block of shares in the Public Hall and thereby keep the Hall for community use prompted a number of the Masons in the area to take the necessary steps to organize a new Lodge. The first organizational meeting was held in the Main Street Offices of W.Bro. E.W. Turner. At a second and much larger meeting held in what is presently the Corinthian Lodge Room, a decision was made to apply to the Grand Lodge of Prince Edward Island for a Dispensation to establish a Masonic Lodge in O’Leary.