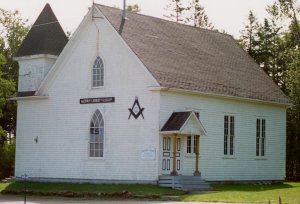 Meets Thursday on or before every full moon at 7:30pm
at the Masonic Lodge, Eldon
(On south side of Trans Canada Highway, east of Cooper’s Shell Station/Grocery store)

Minutes of Saint Andrew’s Lodge No. 13

‘We, The Brethren at Eldon’, prepared by W.Bro. George Doughart and Bro. Irwin Judson, 1982

The membership of the Craft Lodges in Charlottetown and Saint Andrew’s Lodge in Montague included Brethren from the Belfast area in the Nineteenth Century. A communication from Bro. ‘J. N.’ of Belfast praying for pecuniary assistance was received in Victoria Lodge on March 23, 1858. The Lodge approved relief of £1 and following the Brother’s death thirty shillings was forwarded for his widow. (Minutes, Victoria Lodge December 28, 1858) Bro. Daniel MacKenzie of Belle Creek was raised in Saint Andrew’s Lodge in April 1886. On June 7, 1894 twenty-nine Freemasons from Charlottetown travelled by steamer to Halliday’s Wharf where they were met by wagons for transport to St. John’s Church in Belfast for the Memorial Service of Bro. Thomas Morrison. Bro. Morrison was buried with full Masonic Honours. The Brethren present included the Grand Master, M.W.Bro. Thomas A. MacLean. The Brethren returned to the City at 10:30 p.m. (Minutes, Victoria Lodge) On November 25, 1905 thirty carriages met at the Train Station in Surrey to transport a group of thirty-three Masons from Charlottetown to the Church in Belfast for the Memorial Service for Bro. Newcombe Melville MacKenzie of Flat River. Bro. MacKenzie had been made a Mason in Victoria Lodge in 1902. He died in Arizona.