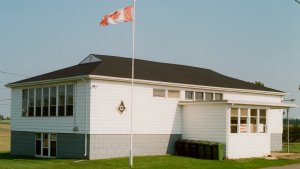 Meets 1st Monday in each month at 7:30 pm at the Masonic Lodge, Central Bedeque
(At north-east corner of intersection of Trans Canada Highway and Route 110) except it will not be open July & August 2019.

From Historic Bedeque by George A. Leard (1948)

On February 28, 1898 the Grand Master, M.W.Bro. Leonard Morris, granted a Dispensation to seven Brethren to establish a Lodge at Cape Traverse. The Brethren had been members of True Brothers Lodge in Tryon. M.W.Bro. Morris attended the first meeting of the Lodge on March 24, 1898 along with D.D.G.M., Bro. Robert E. Sobey, and the Grand Secretary, R.W.Bro. Neil MacKelvie. The Lodge worked ‘Under Dispensation’ until June 1899 when Grand Lodge approved a Charter for the Lodge. The Charter, dated February 28, 1900, was issued by Grand Master, M.W.Bro. John A. Messervey, and signed by the Grand Secretary, M.W.Bro. Neil MacKelvie. W.Bro. Philip MacLeod, one of the Charter Members died on February 27, 1900 just one day before the Charter was dated. The Charter Members were John Muirhead, Alex Strang, Charles Doull, Wm. Dogherty (sic), Frank Howatt, John Sheriff, Philip MacLeod and James Cameron. Although Bro. Cameron was listed as a Charter Member his name appeared in the Treasurer’s Book as a ‘Charter Absent Member’ and his name does not appear in the Lists of Members in the Grand Lodge Proceedings. His dues to Mount Moriah were paid for at least two decades. Mount Moriah showed only seven members in its first Annual Return issued on April 30, 1899.