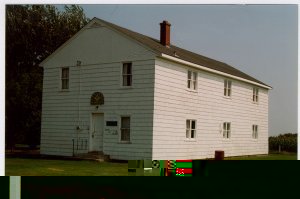 Meets 1st Thursday in each month at 8:00 pm
at the Masonic Lodge, Port Hill
(At intersection where Hwy 12 makes sharp change of direction)

In 1863 several members of King Hiram Lodge who resided in the western part of the Jurisdiction began proceedings to institute a Lodge closer to their homes. The main force behind the request was W.Bro. John Yeo who later became the first Grand Master of the Grand Lodge of Prince Edward Island. Other petitioners from the western part of the Colony were Bros. Daniel Hockin, Donald C. Ramsay, Hugh Ramsay, Donald MacIntosh, James Campbell and Charles Compton. The Petition, dated April 9, 1863, was forwarded to the M.W. Earl of Zetland, Grand Master of the United Grand Lodge of England. The members of King Hiram Lodge who also added their names in support of the Petition were W.Bro. Thomas Hunt, Worshipful Master of the Lodge, W.Bro. David Rogers, W.Bro. Benjamin Mills, W.Bro. James Reichman, W.Bro D.S. Hunt, W.Bro. George Compton, W.Bro. George Hinton, W.Bro. Thomas Brehaut and W.Bro. James Rielly. The Charter was dated August 21, 1863 and designated Alexandra Lodge as No. 983 in the Grand Registry of England and authorized the following as principal Officers:

* The records of the Lodge indicate that Bro. Hugh Ramsay was installed as the first Junior Warden rather than Bro. Hockin as specified on the Charter.

The name of the Lodge was attributed to the wife of the Prince of Wales, Princess Alexandra of Denmark. The Prince later became King Edward V11.