Hiram and Lebanon Lodge No. 3 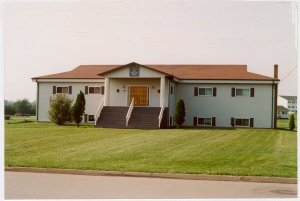 Meets 2nd Monday in each month at 7:30 pm except July & August
at the Masonic Temple, Maple Ave., Summerside
(West off Central St. and down the far end)

On December 20, 1927 King Hiram Lodge No. 3 and Mount Lebanon Lodge No. 6 met jointly under Dispensation from Grand Lodge to formalize the consolidation of the two Lodges. The historic Communication was held in the Lodge Room which was located in the Journal Building at the corner of Queen Street and Water Street. The Dispensation dated December 10 specified that the threefold purpose of the Communication was to confirm theMinutes of the last Regular Communications of King Hiram Lodge and Mount Lebanon Lodge held on December 12 and December 19 respectively and after calling each Lodge from Labour to Refreshment to call them on again concurrently as a Consolidated Lodge to elect the new Officers of the Consolidated Lodge and to fix a day for the Regular monthly Communications.